The ultrasonic laser detection system, interferometer & laser head unit are provided by RECENDT. The interferometer is used to convert phase changes in the light backscattered from the sample surface to amplitude changes, which are measured via photodetectors. A two wave mixing (TWM) interferometer does the conversion by mixing a reference beam and the sample beam in a GaAs-crystal.

The photo below shows the final bench test of the detection system in action, with the laser head mounted on a moving stage to replicate the robot motion. 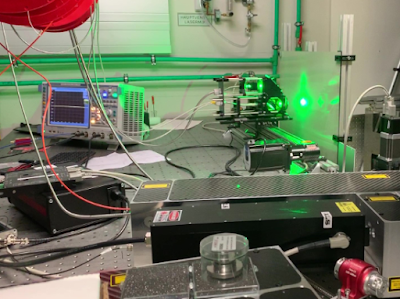